There are two things that I think about A LOT the first, is travelling around Mexico stuffing my face with Tacos, and the second is owning a Taco truck. I adore Tacos and have read more Taco cookbooks than you would ever think possible. Maybe, I’ve found my food blog niche, and today is my first ever accidental chef taco recipe – slow cooker pork tacos.

I read somewhere once that there is no such thing as a “traditional taco” and that you can just basically use the taco as a blank canvas. Of course, there are the world-famous regional Mexican tacos: carnitas, al pastor and Asada. There’s the ancient process of nixtamalization for making masa harina, a vital ingredient for making corn tortillas, which themselves are essential for creating any decent taco. The history around the humble taco is so intriguing to me. I’d strongly recommend giving the Taco Chronicles a watch on Netflix if you love Tacos too.

So what we’re saying is, the corn tortilla is the vessel, and you can essentially put anything you like in it. The only limit is your imagination. For me, a taco needs a sauce or salsa, the main “meat” and something fresh, raw and crunchy.

Today’s slow cooker pork tacos are made using pork spare ribs, rather than a joint of pork. It’s so simple to turn them into a crispy, sweet, spicy taco; all you need is a slow-cooker (or crockpot).

There are plenty of other things to do on a Taco Tuesday than just eat tacos, and this recipe means you can do them all! All you’ve got to do is compile a super quick rib rub, quarter a couple of onions, pierce a bulb of garlic, and then you can get on with your day – the slow cooker pork tacos will be ready for the final stages when you return.

Cook the pork ribs in the crockpot for 7 – 8 hours on low, or 4 – 5 hours on high. That meat will be tender and falling off the bone – which is absolutely what we want for this recipe.

When you return from your wonderfully successful Tuesday out in the big bad world, remove the ribs from the crockpot. Remove all the meat from the bones, and shred. Discard as many of the gristly bits as you can during this process. If you miss some, fear not, you’ll be able to grab them during the skilleting.

Pre-heat a cast iron pan (or frying pan) until it’s super smoking hot. Carefully add the rib meat. Cook the pork for about 10 minutes, stirring occasionally. You want the meat to go crispy on the edges, don’t worry too much about it catching the bottom of the pan, it’ll add to the taste.

While the pork is crisping and smelling stunning, deseed and finely dice the tomatoes, finely chop the red onion and roughly job your coriander and add to a bowl, just before serving hit the salad with a large pinch of salt, and the juice of half a lime.

What should I serve with my Tacos?

In my opinion, you HAVE to serve your Taco Tuesday Tacos with corn tortillas. If possible you should also make them at home – I’m perfecting my recipe before I share it, but it’s a super simple process. A tortilla press deffo simplifies the process.

I served these tacos with my super simple Mango, Maple + Coriander Hot Sauce – the sweetness and the heat just elevates the tacos.

Want to keep this recipe for later? Why not save this Pin to your Taco Tuesday or Food Inspiration boards on Pinterest. Drop me a follow while you’re over there. You’ll get not only my recipe pins, but you’ll see what inspires me too. I probably pin more of other peoples recipes than my own. 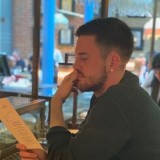